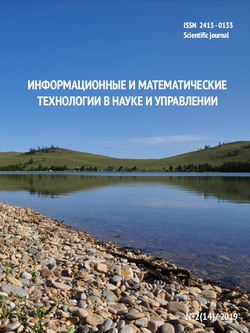 The problem of substantiating the properties of complex technical systems has an interdisciplinary character because of it requires the application of knowledge of all general technical and special engineering disciplines, some branches of physics, chemistry and psychology, as well as methods and means for mathematical modeling and information technologies. One of the promising methods for creating relevant models for this problem is the use of the principles of self-organization reflecting both the actions of a team of researchers, and using appropriate variables and parameters characterizing the dynamics of the state of an object. The paper proposes to describe the basic principles of an information technology for creating a self-organizing safety research system, where decision making (modeling) is based on a self-organizing algorithm that implements the interaction of “solvers” of disciplinary and interdisciplinary tasks of different competencies and specializations.

The paper discusses the problem of improving the knowledge bases and intelligent systems design. The efficiency of this process can be improved with the aid of automatic generation of specifications and source codes of knowledge bases for a certain knowledge representation language. The generation, in turn, is based on the analysis and transformation of various information sources, such as conceptual models that describe a subject domain and are presented in different formats (e.g., UML models, concept maps, tree-like semantic structures, fishbone diagrams, etc.). Generation of specifications and codes methodologically is based on the model transformation concept from a model-driven engineering (MDE) and uses metamodels to describe the source and target (CLIPS and OWL) formalisms. The paper describes a method for computer-aided metamodel formation for the analyzed formats of conceptual models, and meta-metamodels for the unified representation and storing of metamodels.

The digital energy paradigm is focused on the establishment of cyber-physical systems and the large-scale use of Smart Grid technologies. Apart from the great potential of such a transition, an intelligent energy system (IES) is noted to be sensitive to ever-increasing cyber threats. The need to ensure and maintain reliable IES operation in the event of external and internal cyber-intrusions requires an analysis and consideration of possible risks of the IES cybersecurity and the development of further measures to maintain it. This paper is focused on the information and communication infrastructure of the IES and cybersecurity properties of SCADA and WAMS, which are part of the infrastructure. Particular attention is paid to the analysis of cybersecurity risk factors that are further taken into account when developing a cybersecurity risk assessment algorithm of the information and communication infrastructure of the electric power system based on the theory of fuzzy sets, which is the result of the presented research. The performance of the algorithm under uncertainty demonstrates its effectiveness.

5. IMPROVEMENT OF THE CONTROL SYSTEM OF SELECTION AND ADAPTATION OF STAFF WITH IT TOOLS (с. 52-61)
Vasily I. Solovjev, Federal state budgetary educational institution of higher professional education "Novosibirsk state University of Economics and management NINH"
Annotation

The analysis and assessment of a condition of infrastructure of a system of heat supply of the municipal unit on the example of Novosibirsk and in general across Russia is presented in article. Comparative characteristic of specific losses of heat on key elements of technological process of a chain is given: "generation - transport - consumption of thermal energy" possibilities (potentials) and zones of economy of thermal energy are also shown. The technologies of the first steps of fragmentary digitalization of technological process of a chain existing in the Russian and regional practice are described: "generation - transport - consumption of thermal energy". The approach in the solution of a problem of creation of a uniform complex of automated management of a system of the centralized heat supply, for example, on the basis of the uniform digital platform based on integration of the digital products pro-showing earlier the practical importance in digitalization of separate components of systems of heat supply is offered.

The work is devoted to the discussion of the issue of identifying contradictions in the production knowledge bases (KB) based on the apparatus of logic with vector semantics. A brief coverage of the problem of knowledge verification is made. It is noted that the important issue of verification is the detection of internal contradiction, when some chain of inference give rise to contradictory conclusions. It is shown that the apparatus of logic with vector semantics, due to the natural ability to work with conflicting data and knowledge, can help automate the procedure for identifying internal contradictions in such KB.

7. INNOVATIVE MATHEMATICS: A SEARCH OF THE BASES AND LIMITS OF MODELING REALITY (с. 69-87)
Alexander K. Cherkashin, V.B. Sochava Institute of Geography Siberian Branch of the Russian Academy of Sciences
Annotation

The problem of using mathematical knowledge for modeling real processes and phenomena by comparing the features of numerical systems with the laws of the structure and development of systems of the observed world is discussed. The basis and limitations of modeling in the procedures of formalization of conceptual constructions and substantial interpretation of mathematical formulas are determined. The cognitive procedure of transition from abstract to concrete knowledge is described as the metatheoretic transformation of knowledge connected with emergence of new quality of numerical systems, new information layers on old bases of numerical point sets. Description of new specific situations requires more complex and abstract mathematical constructions.

The relevance of the research is due to the meaningfulness of the gas trunkline "Power of Siberia" for the development of the Eastern regions of Russia: their gasification and the emergence of new gas chemical and related industries, as well as the requirements for the reliability of its operation associated with the complex climate and natural conditions. On the basis of mathematical model of optimization of technical parameters of the projected trunkline taking into account reliability and the developed computing programs researches on the choice of an optimal variant and assessment of reliability of the site of trunkline " Power of Siberia" from the Chayanda field to Blagoveshchensk were executed. The analysis of results showed - the received optimal variant of construction of the site of trunkline on specifications will be coordinated with the version of the gas pipeline realized by PJSC Gazprom. Level of its reliability is estimated as rather high. However, gas trunkline "Power of Siberia" has ambiguous value for socio-economic development of Siberia and Far East of Russian Federation and gas supplies to China.

The paper presents the testing results of a new approach to the modeling of interrelations between energy industry and economy with the use of the theory of systems in long-term forecasting of Russia’s national economy. The authors briefly describe the model, give a scheme of interrelations, specify the sequence of model calculations, and share the experience of the model development based on the aggregate representation of Russia’s national economy. The main results of the model testing concern the efficiency of the model. Also, the possibilities of using the developed approach to the modeling of the economies of certain regions and territories are assessed, and the requirements for the initial statistical data necessary for the construction of the models are formulated.

The paper focuses on the principles of prototyping. The role of the software prototype to be developed in the context of intelligent electric power system is demonstrated. The software and interface features of prototyping are considered for the optimization of the structure of the backbone electrical network of the electric power system. The examples of the sequential formation of a network option and the display of the software operation results are given.

The article discusses the results of the international project "Methods and Technologies for Assessing of the Energy Sector Impact on the Geoecology of the Region", carried out with the assistance of the Eurasian Foundation for the Support of Scientific Research (EAPI) and supported by grants from the Russian Federal Property Fund and BRFFR. The article presents the structure of emissions of pollutants from energy facilities in the studied regions of the Russian Federation and the Republic of Belarus. Identified most important energy facilities of the studied regions. The results of preliminary testing of the hypothesis about the impact of energy on the quality of life of the population are given. This work was partially supported by the EAPI-RFBR grant № 18-57-81001 and the RFBR grant №19-57-04003 from the Russian side and the BRFFR grant № Х18ЕА-003 from the Belarusian side.