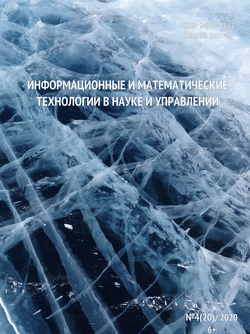 The article deals with the problems of modeling semi-structured socio- economic systems based on the use of the cognitive approach. The original information technology for supporting the cognitive modeling of such systems based on the use of fuzzy cognitive maps is proposed. The experience of using the proposed technology and the software system that implements it in solving a number of practical problems of researching strategies for managing socio-economic systems is described

The article discusses a two-level information technology for researching energy security problems, where the levels of qualitative and quantitative analysis are combined. The use of cognitive models of different levels is discussed in more detail. The level of qualitative analysis of the threat "Under-investment" is described. The structure of traditional optimization models of the fuel and energy complex is described. The possibility of integrating cognitive and mathematical models is shown.

3. A SET OF TOOLS TO SUPPORT DEVELOPMENT AND MAINTENANCE OF SOLVERS FOR SYSTEMS WITH ONTOLOGICAL KNOWLEDGE BASES (с. 34-43)
Valeria.V. Gribova, Elena.A. Shalfeeva, Far Eastern Branch of the Academy of Sciences
Annotation

The modern approach to creating systems with knowledge bases is based on an ontological approach. A tool environment is proposed for building viable software services that work with such knowledge bases and managing their collective development. The tool support method is aimed at creating and developing libraries of ontology-based operations, using them in the design of software tools, allocating authority to create components of systems with knowledge bases, and controlling and integrating them into a cloud-based, supported knowledge-based decision support system.

Annotation of the corpus of Russian-language popular science texts is discussed. Particular attention is paid to the annotation scheme, in which the objects of annotation are not only pragmatic and semantic aspects of argumentation, but also their linguistic indicators. The presentation of argumentation indicators in the form of lexical and lexical-grammatical patterns is proposed, which are automatically generated from a marked-up fragment of text, and then, if necessary, are manually specified by an expert based on the results of a search in the corpus and analysis of all relevant fragments. The resulting dictionary of indicators is used to search and automatically highlight indicators of argumentation in unannotated text.

The use of intelligent and digital technologies in systems for measuring, transmitting, and processing information, which are part of the information-communication infrastructure, is aimed at improving the efficiency of EPS management. At the same time, with the EPS digitalization, there has been a rise in vulnerabilities to cyberattacks. In this context, the urgency of providing timely, complete, and reliable data to perform control in the case of cyberattacks is increasing. We propose an algorithm to process synchronized vector measurements based on wavelet analysis and fuzzy logic, which improves the quality of information used in the state estimation of electric power systems.

6. METHOD FOR DETERMINING THE LEVEL OF CYBER SITUATIONAL AWARENES ON ENERGY FACILITIES (с. 64-74)
Daria A. Gaskova, Melentiev Energy Systems Institute of Siberian Branch of the Russian Academy of Sciences,
Annotation

The article describes the research direction of situational awareness in the cyber environment on energy facilities. A model based on a Bayesian Belief Network and a numerical method for determining cyber situational awareness are proposed to increase awareness of the cyber environment state on such facilities. The model is based on causal relationships between the vulnerabilities of the local area network and possible cyber threats, presented in the form of vectors of penetration into the network, vectors of the development of cyber attacks and attack vectors on the target asset, combined in scenarios. The work focuses on scenarios, the consequences of which can be regarded as extreme situations in the energy sector caused by cyber threats

The paper compares the effectiveness of modifications of the shuffled frog leaping algorithm that allow metaheuristics to function in the binary search space. Methods based on modified algebraic operations, transformation functions and fusion operations, as well as their combinations, have been tested for the task of selecting features in the fuzzy classifier. The SVC2004 data set containing a large number of features for user authentication based on dynamic handwritten signature characteristics was used in the experiment.

8. APPLICATION OF THE INTEGRATED INDICATOR OF BROWSER FINGERPRINTING IN THE PROBLEM OF ADAPTIVE AUTHENTICATION OF ACCESS SUBJECTS (с. 84-92)
Alexander A. Salomatin, Andrey Yu. Iskhakov, V.A.Trapeznikov Institute of Control Sciences of Russian Academy of Sciences
Annotation

This article presents an approach to user authentication in the web space by comparing the integrated metrics of browser fingerprints. The integrated indicator is calculated differentially depending on the class of the protected system, the available authentication factors and the hardware characteristics of the computing systems used by the access subjects. The experiment carried out confirmed the successful application of the method for a specific practically obtained set of browser fingerprints

A problem of construction of a research environment for Next Generation Sequencing data processing is considered. The environment comprises cloud data storage (DaaS) and computational services (SaaS and PaaS), as well as visualization, and data integration services. We are integrating existing open-source technologies to support MiSeq SOP (standard operational procedure), which is to allow domain specialists, biologists, to process data independently. For the realization of the integration, formal models of the SOP are constructed, automatically processed (transformed) into source code of new components. The technique of the transformation is based on Model Driven Architecture principles and logical inference of the derived models and the code. The current results are presented and discussed

11. INFORMATION COORDINATION OF THE NATIONAL ECONOMIC AND INDUSTRY MODELS ON THE EXAMPLE OF THE RUSSIAN FEDERATION FORESTRY (с. 124-131)
Alina S. Stoylova, Lyudmila V. Mashkina, Yuriy Sh. Blam, Institute of Economics and Industrial Engineering of Siberian Branch of the Russian Academy of Sciences
Annotation

The modeling approach described in this article allows, on the basis of OIIM, to build the forestry industry model of the production-transport type. Using this model, it is possible to take into account the harvesting and processing of timber, the production of intermediate and final products, existing and new capacities, the load on the forest complex from the national economy, as well as import, export and transport links between regions. The transition from solving the problem of finding the maximum final consumption to the problem of finding the minimum cost of production and converting cost indicators into natural values allows to transform the model to the form most suitable for analyzing industry characteristics and predicting the development of the complex

The studying is focusing to the relationship of the concepts of the mathematical subject area on the example of the section of mathematical physics equations. A version of the thesaurus article for terms and related equations and formulas is proposed. The peculiarity of such a thesaurus lies in the use of the context of formulas for their additional identification in the subject area. In addition, it is proposed to take into account the indices of authors and articles where thesaurus terms are found. This approach helps to refine the search query and reduce information noise when using the thesaurus in digital bibliographic collections.

The article discusses the possibilities of using semantic technologies in the development of an intelligent information system to support energy and socio-environmental research. The use of the proposed knowledge management technology makes it possible to integrate research in different subject areas. The authors refer to the semantic technologies as the traditional ontological representation of knowledge and the cognitive approach, which allows formalizing the processes of making expert decisions. The use of ontologies is proposed to describe the knowledge of subject areas of interdisciplinary energy and socio-ecological research related to assessing the impact of energy on the quality of life. Ontologies make it possible to agree on terminology between researchers and are used to describe and structure knowledge and required information. Cognitive modeling is used to support researchers in the decision-making process, identify and describe cause-and-effect relationships between the main concepts of the subject area, and visualize possible situations. The paper describes the components of the ontological space of knowledge for the implementation of joint energy and socio-ecological studies of the impact of energy on the environment and quality of life. Examples of an ontology, a cognitive map, and a variant of the developed data model for designing a database for research are given.

The article discusses methods of building an intelligent information system to support expert decisions on strategic innovative development of the energy sector. The necessity of using Big Data analysis methods has been substantiated. Architecture of an integrated repository of an intelligent information system is presented, in which the main component is a system of ontologies on the basis of which information, data and knowledge from various sources are combined.