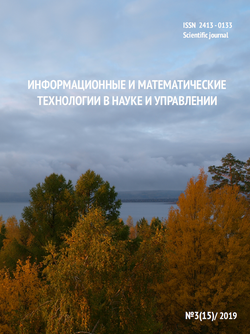 The article discusses the application possibilities of machine learning methods (artificial neural networks (ANN) and genetic algorithms (GA) to form management actions when applying the concept of situational management for intelligent support of strategic decision-making on the development of energy. At the first stage, the application of ANN to classify extreme situations in the energy sector, to select the most effective management actions (preventive measures) in order to prevent a critical situation from developing into an emergency. Genetic algorithms are proposed to be used to determine the weighting coefficients for training ANN. An algorithm for constructing a classifier based on a neural network and a demonstration task using data on generation and consumption of the United Electric Power System of Siberia are presented.

The article proposes a method of business process management system design on the manufacturing enterprise based on preliminary ontological and simulation modeling of subject area. A purpose of the research is to organize a decision making support for the project participants directed on developing and implementation of automated business process management systems for enterprises with mostly project organization of its main activity. The research is supported by RFBR grant № 19-08-00937 "Models and methods of intellectual decision making support in software project management realized on manufacturing enterprises"

3. AN ONTOLOGICAL APPROACH TO THE DESIGN OF DATABASE FOR ASSESSING THE IMPACT OF ENERGY SECTOR ON THE ENVIRONMENT (с. 31-41)
Tatiana N. Vorozhtsova, Nadezhda N. Makagonova, Liudmila V. Massel, Melentiev Energy Systems Institute of Siberian Branch of the Russian Academy of Sciences
Annotation

Currently, the problem of the energy sector influence on the environment as one of the anthropogenic factors is obvious. As part of studies to assess the impact of energy sector on the geoecology of the region, it is proposed to develop a Web-based information system integrating mathematical and semantic methods, instrumental tools, a database and a knowledge base of the subject area under consideration. The article discusses the proposed ontological approach to the structuring and integration of data and knowledge necessary for research. Ontologies are proposed to be considered as a prototype of an infological data model when designing a database and knowledge base.

An approach to the development of the algorithmic base of the medical decision support system when choosing the trajectory of treatment for children with an excessive weight is proposed. The structure of the missing data of clinical and laboratory indicators was studied, the missing values were restored using the multiple recovery method, and the size was reduced using the R language packages. Based on the results, a decision-making model was constructed and a set of rules for selecting the treatment trajectory was formed. As a result, a data processing algorithm was formed to decide on the choice of treatment group for overweight children.

5. AN APPROACH TO THE SOFTWARE DEVELOPMENT FOR THE DESIGN OF HEAT SUPPLY SYSTEMS (с. 53-65)
Evgeny A. Barakhtenko, Dmitry V. Sokolov, Melentiev Energy Systems Institute of Siberian Branch of the Russian Academy of Sciences
Annotation

The paper presents a new approach to the automated construction of software for solving design problems of heating systems. The approach is based on the Model-Driven Engineering paradigm. The essence of this paradigm lies in the fact that software is generated on the basis of a formal description presented by models. Knowledge of heat supply systems, applied tasks and applied software is formalized in the form of ontologies. The automated construction of a software is carried out on the basis of a computer model of a heat supply system, ontologies and metaprogramming technologies. The proposed approach allows us to successfully solve the problem of separation of methods for solving applied tasks and models of heat supply system elements. To this end, the methods are implemented in the form of software components that are not related to the properties and models of specific equipment. And the models of heat supply system elements are automatically compiled into software components. In the process of building a software system, software components that implement models and methods are dynamically integrated. As a result, a software system oriented to the solution of a specific applied task is created in an automated mode. The developed approach was applied for the implementation of the SOSNA software. SOSNA is used to design urban heat supply systems.

Determining the optimal parameters of heat supply systems involves finding a solution that provides the best network capacity by replacing pipelines and installing (upgrading) pumping stations. In this case, we usually solve the complex problem of nonlinear programming with discrete and continuous variables. The ESI SB RAS has developed effective methods for its solution. A method based on dynamic programming was developed for a tree-like network. For ring networks, there is a multi-loop optimization method based on the principle of sequential improvement of the solution. An important feature of these methods is that they allow you to fully take into account the properties of complex mathematical models that determine the features of the equipment used, methods of its installation and operation. The paper presents the results of the further development of algorithms for solving the complex problem of determining the optimal parameters of heat supply systems. A modified method and algorithms for determining the optimal parameters of heating systems are proposed. The proposed method and algorithms implemented in the SOSNA software. SOSNA is used to solve problems of optimal reconstruction of heat supply systems of cities.

We consider the means of managing computations in the applied microservices package intended for the qualitative research of binary dynamic systems based on the Boolean constraints method. The computational domain model and the architecture of the agent provide the possibility of multivariate, parallel and pipeline computing on dedicated resources. The proposed approach is demonstrated by the example of an analysis of the structure of the shift register state space

8. A CONSTRUCTIVE APPROACH TO THE CHECKING OF VALIDITY OF 2-QUANTIFIED BOOLEAN FORMULAS IN THE HPC2QALL SOLVER (с. 91-101)
Gennady A. Oparin, Vera G. Bogdanova, Sergey A. Gorsky, Matrosov Institute for System Dynamics and Control Theory Siberian Branch of the Russian Academy of Sciences
Annotation

The high computational complexity of some problems in the analysis of dynamics and structural-parametric synthesis for different classes of dynamic controlled systems leads to the development of methods and software for their parallel solution. Based on the Boolean constraints method, problems of qualitative analysis of the trajectories behavior of binary dynamical systems, whose operation is considered on a finite time interval, are reduced to solving Boolean satisfiability problems and checking the validity of quantified Boolean formulas. A mathematical model of the studied dynamic property is constructed as a system of Boolean equations, taking into account both the property specification and the equations of the dynamics of a specific object. Such an approach is declarative and provides the possibility of data parallelism. For verifying the validity of the quantified Boolean formulas, a parallel solver Hpc2qall was implemented. Unlike similar solvers, Hpc2qall not only produces the answer (SAT or UNSAT) but finds all values sets of universally quantified variables leading to this answer. An example is given of applying a constructive approach to solving the problem of the synthesis of stabilizing feedback.

This paper describes the automated axis motion device used to positioning of model and movement of the probe on the set program at experimental research on vertical jet facility. The subsystem of data collection and management allows to set an algorithm of movement of model on two coordinates for specific experiments, including on a difficult trajectory both in the manual mode from the control panel, and in automatic from a workplace of the experimenter. The management system the axis controller is a component of a system of the automated collecting experimental data on the vertical jet facility of ITAM SB RAS.

The article describes the characteristics of the energy system of the Belarus Republic, proposes and solves the problem of the optimal structure modeling of energy production with fuzzy parameters. As fuzzy parameters were used the demand for electricity and heat. As a result of the use of the proposed model, the optimal structure of the energy production of the Belarus Republic was obtained, in which the production volumes of each station take an fuzzy value.

Modeling the development of gas supply systems to create world forecasts of their development and interaction of gas markets is carried out on the basis of gas flow models. This paper presents a hierarchy of gas models, mainly foreign ones, their analysis, describes the capabilities, factors taken into account and the results obtained. In all considered models, data on gas supply systems are presented in aggregated form, although the methods of aggregation and their accuracy are not indicated. The paper briefly describes the developed methods of aggregation for solving problems of optimal development of gas supply systems with their multi-level modeling.

The article is devoted to the simulation of the pulse-frequency converter (PFC) circuit in the Matlab 7.5 environment. The authors described the principle of the PFC, carried experiment out got the adjustment and output characteristics of the PFC. The analysis of the characteristics obtained in the simulation and experiment. It is showed that the work of simulated PFC scheme is sufficiently adequate